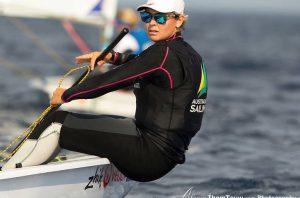 A late start to sailing at 11 in a Sabot meant Krystal had to fight hard to play catch up with the younger six and seven year olds.
Sailing at Elwood Sailing Club, renowned for its surf, for which she remains grateful, the Brighton resident thought all beaches were the same. “I went to Brighton to sail one day and thought “where’s the surf? This is too easy! The same happened at the States at Port Melbourne – I was the only one who could get off the beach successfully!”

At 13, the schoolgirl was forced to make a decision. To choose between attending State trials for a hockey team or sailing – the latter won.

Krystal was chosen to represent at the 2003 Youth Worlds, finishing second in the Radial. Backing up with a win in the 2004 Radial Women’s Worlds – she was on her way. The Europe was the single-handed class for Athens, so Krystal switched, posting some good results. But then came the announcement of the Radial for 2008, so back she came.

In 2005, cracks appeared, results were not reflecting her talent. “I had a shocker in Europe. I didn’t have a clear-cut goal. I was complacent.” It was her first ever European competition for Olympic classes. Returning home she realised a change of attitude was required. With renewed vigour, she finished a much better fifth at the 2005 Radial Worlds in Brazil. “I’ve never felt more comfortable and confident.”

She finds lots of people inspiring, but having read Ellen MacArthur’s book, Krystal says “She is amazing,” and Laser sailor Michael Blackburn, who helped with her choice of studying a degree in Exercise Science, which she recently finished.

Top of her highlights is winning the 2004 Radial Worlds. “Not so much winning, more because it was in Australia; my parents and supporters were there – it was their proudness. It was very important for me and a good stepping stone – it was the first time I’d cracked it, I was sick of coming second.” Two awards came her way that year.

The Olympics have fascinated her since 1996, when she collected anything to do with the Games. But it was the sailing competition at Sydney 2000 that fired her ambitons.

Is she daunted by the Olympics? “No, as you get older, you realise that every regatta you go to is training for something else – even the Olympics. Thinking that way takes the pressure off.”

Krystal competed in the 2008 Olympic Games in Qingdao China, finishing a creditable 10th Overall after only 6 months in the class. In 2008 Krystal’s team of Karyn Gojnich and Angela Farrel also finished 2nd overall in the Olympic Yngling World Championships.

During 2009, Krystal took on a new challenge of windsurfing in three different disciplines, Windsurfer One-design, Olympic RSX, and Formula Windsurfing. She competed in all three National Championships and Tour down under circuit.

After the hype created from the AC,  Krystal has been trying her hand at the catamaran class. Doing the Hobie16 Worlds in Jervis Bay 2014 and Arrow Nationals. Krystal won the Hobie 16 Women European Championship with her crew Sarah Hollands in Barcelona Spain. In 2016 Krystal won the Hobie Womens Worlds in China with crew Georga Warren-Myers.

In 2015 Krystal was head of the strength & conditioning program for the VIS talent squad & was Open Bic Head Coach for 2015 World Championships in Safety Beach, Victoria:  her sailors all finished in the top 30, with top results being a 3rd & 6th.